Welcome To Our Office in Vancouver, BC.

Animal Dermatology in Vancouver, BC

Animal Dermatology in Vancouver, BC

Just like humans have problems with their skin, many animals have different issues. Whether it’s flaking, dry, lesions, sores, or just allergic reactions to plants, fabrics or something that just isn’t right, at Atlas Animal Hospital we can help diagnose and cure the issue.

Pet skin disorders are among the most common health problems in pets. Skin disorders in pets have many causes, and many of the common skin disorders that afflict people have a counterpart in pets. The condition of pet’s skin and coat can also be an important indicator of its general health. Skin disorders of pets vary from acute, self-limiting problems to chronic or long-lasting problems requiring life-time treatment. They also need to be differentiated on the basis of being of primary or secondary (due to scratching, itch) in nature, making diagnosis complicated. Pet skin disorders may be grouped into categories according to the causes.

Immune-mediated skin disorders: Skin disease may result from deficiency or overactivity of immune responses. In cases where there is insufficient immune responses the disease is usually described by the secondary disease that results.

Demodicosis or demodectic mange or red mange, is caused by a sensitivity to and overpopulation of Demodex canis as the animal’s immune system is unable to keep the mites under control. 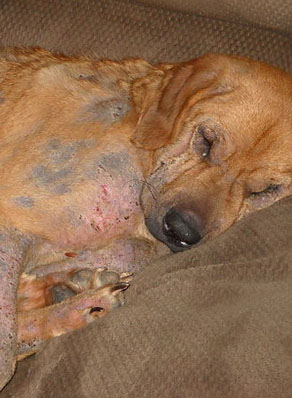 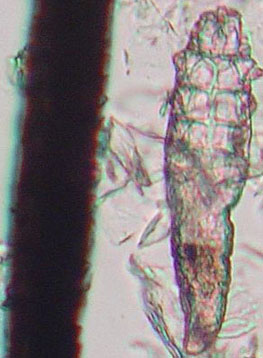 Skin infection Malassezia: Malassezia (formerly known as Pityrosporum) is a genus of fungi. Malassezia is naturally found on the skin surfaces of many animals, including humans. In occasional opportunistic infections, some species can cause hypopigmentation.

Bacterial Infection Pyoderma: Pyoderma is a skin infection that can cause itching, redness, crusts, pustules, a rash, and/or hair loss at the site of the infection, among other, grosser symptoms. Dogs and cats both can get the condition, which occurs when something has happened to the skin that allows bacteria to grow unchecked. Pyoderma can be treated with oral or topical antibiotics and/or shampoos, but the underlying cause has to be addressed, too.

Hypersensitivity Disorder Atopic Dermatitis: The skin of a patient with atopic dermatitis reacts abnormally and easily to irritants, food and environmental allergens and becomes very itchy, which leads to scratching, redness, and flaky skin. It is sometimes called “the itch that rashes” because the itchiness precedes the rash, and scratching the itchy skin may cause the rash. It also becomes vulnerable to surface infections caused by bacteria. The skin on the flexural surfaces of the joints (for example inner sides of elbows and knees) are the most commonly affected regions in people. Atopic dermatitis often occurs together with other atopic diseases like hay fever, asthma and allergic conjunctivitis. It is a familial and chronic disease and its symptoms can increase or disappear over time. Atopic dermatitis in older children and adults is often confused with psoriasis. Atopic dermatitis afflicts humans, particularly young children, and is also a well-documented disease in domestic dogs. 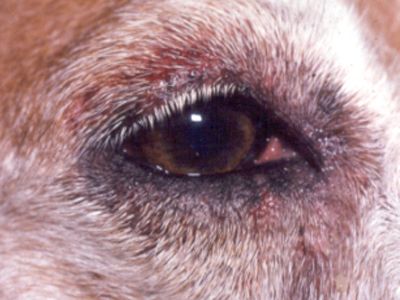 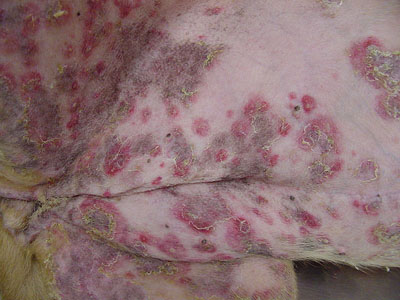 Autoimmune Disorder Discoid Lupus Erythematosus: Discoid lupus erythematosus (DLE) is an uncommon autoimmune disease of the basal cell layer of the skin. It occurs in humans and cats, more frequently occurring in dogs. It does not progress to systemic lupus erythematosus (SLE) in dogs. SLE can also have skin symptoms, but it appears that the two are either separate diseases or DLE is a mild form of SLE. DLE in dogs differs from SLE in humans in that plasma cells predominate histologically instead of T lymphocytes. Because worsening of symptoms occurs with increased ultraviolet light exposure, sun exposure most likely plays a role in DLE, although certain breeds (see below) are predisposed. After pemphigus foliaceus, DLE is the second most common autoimmune skin disease in dogs. The most common initial symptom is scaling and loss of pigment on the nose. This is found in up to 90 percent of dogs. The surface of the nose becomes smooth gray, and ulcerated, instead of the normal black cobblestone texture. Over time the lips, the skin around the eyes, the ears, and the genitals may become involved. Lesions may progress to ulceration and lead to tissue destruction. DLE is often worse in summer due to increased sun exposure. 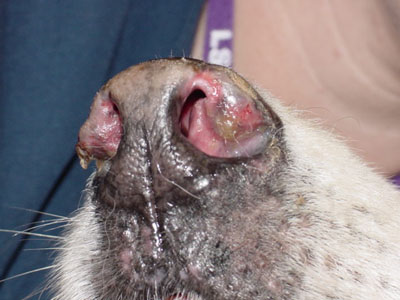 If you have concerns about skin irritations, rashes, sores, or any other concern, book an appointment today.