Welcome To Our Office in Vancouver, BC.

Pet Deworming in Vancouver, BC

Even the most meticulous of pets can have worms. This is an issue that can be treated and should not be allowed to get really bad. Contact us today to get moving forward with deworming.

Types of Worms & How We Treat Them
De-worming means treating your pet for G.I. tract and intestinal parasites. Heartworm is a deadly disease spread from the bite of an infected mosquito carrying the heartworm larvae.

Roundworms and tapeworms are contracted by eating infected fleas and can be seen in your pet’s stool. Puppies can also be born with roundworm, a parasite that causes extreme discomfort and even death in severe cases. Kittens may become infected with roundworm their mother’s milk or feces.
Heartworms have no outward effects and veterinarians recommend a regular check for them during an examination.

Topical and monthly drugs can treat your pet for parasites. Our veterinarian may also recommend drug by injection every 6 months to keep infection under control. Annual physical exams include a check for heartworms, which is determined by a simple blood test.

If you believe your pet is infected, give us a call today to schedule a de-worming appointment or contact us by filling out our form, at Atlas Animal Hospital we can help diagnose and cure the issue.

Finding out what’s bothering your pet is our #1 concern, that is why we are the number one choice of vets in Vancouver. 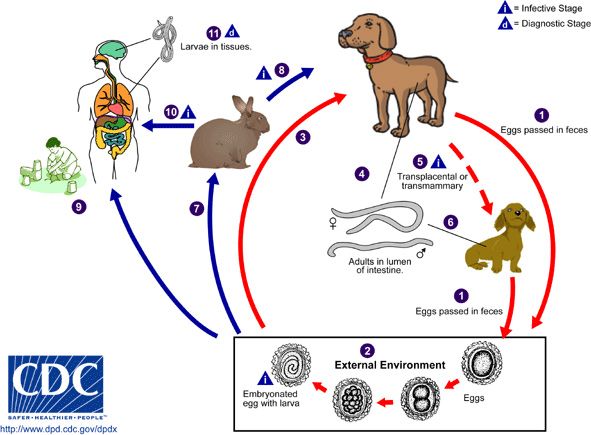 Toxocara canis or canine roundworm is worldwide-distributed helminth parasite of dogs and other canids. T. canis is gonochoristic, adult worms measure from 9 to 18 cm, are yellow-white in color, and occur in the intestine of the definitive host. In adult dogs, the infection is usually asymptomatic. By contrast, massive infection with T. canis can be fatal in puppies. As paratenic hosts, a number of various vertebrates, including humans, and some invertebrates can become infected. Humans are infected, like other paratenic hosts, by ingestion of embryonated T. canis eggs. The disease caused by migrating T. canis larvae (toxocariasis) results in two syndromes: visceralis larva migrans and ocularis larva migrans. Owing to transmission of the infection from bitches to puppies, preventive anthelmintic treatment of newborn puppies is strongly recommended. Several antihelmintic drugs are effective against adult worms, for example pyrantel, fenbendazole, selamectine, etc. 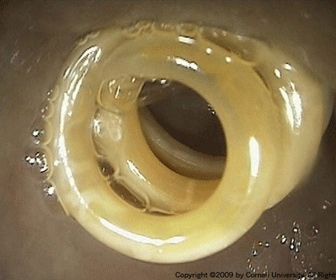 Toxocara cati or feline roundworm is worldwide distributed parasite of cats and other felids and it is one of the most common nematodes of cats. Adult worms are localised in gut of the host. In adult cats, the infection is usually asymptomatic. However, massive infection in juvenile cats can be fatal. Adult feline roundworms may be brownish-yellow to cream colored to pink and may be up to 10cm in length. Adults have short, wide cervical alae giving their anterior ends the distinct appearance of an arrow (hence their name). Eggs are pitted ovals with a width of 65μm and a length of about 75μm making them invisible to the human eye. The larvae are so small that they are easily transmitted from an adult female to her nursing kittens through her milk.

As in all members of family Dipylidiidae, proglottids of the adult worm have genital pores on both sides (hence the name double-pore tapeworm). Each side has a set of male and female reproductive organs. The uterus is paired with 16 to 20 radial branches each. The scolex has a retractable rostellum with four rows of hooks, along with the four suckers that all cyclophyllid cestodes have. In children, infection causes diarrhea and restlessness. As with most tapeworm infections, the drugs of choice are niclosamide or praziquantel. The best way to prevent human infection is to treat infected animals to kill fleas. Tapeworm infection usually does not cause pathology in the dog or cat.

Heartworm (Dirofilaria immitis) is a parasitic roundworm that is spread from host to host through the bites of mosquitoes. The heartworm is a type of filaria, a small thread-like worm, that causes filariasis. The definitive host is the dog, but it can also infect cats, wolves, coyotes, foxes and other animals, such as ferrets, sea lions and even, under very rare circumstances, humans. The parasite is commonly called “heartworm”; however, adults often reside in the pulmonary arterial system (lung arteries) as well as the heart, and a major effect on the health of the animal is a manifestation of damage to the lung vessels and tissues. Occasionally, adult heartworms migrate to the right heart and even the great veins in heavy infections. Heartworm infection may result in serious disease for the host, with death typically as the result of congestive heart failure. 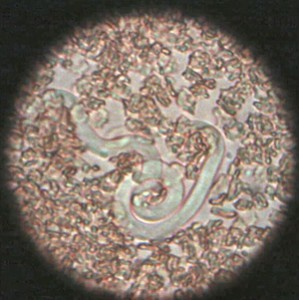 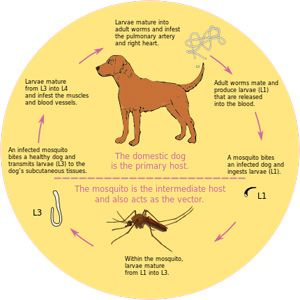